Your mom was right—this CAN rot your brain!!

Turns out that the older we get, the more we realize all those things that our mom was right about. Add this one to the list!

Televisions, cell phones, ipads, and computers all produce radiant light that has been found to alter brain function. This is most notable in the “under 18” population. Their brains are wired differently and most importantly, are in the middle of a very important growth period. And when at this age, the dominant brainwave frequency is known as “alpha.” And it just so happens that TV and other screen time directly effects Alpha brainwaves the most. See where I’m going with this? 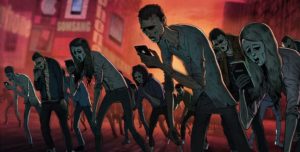 This picture describes the problem more than you may realize. First of all, when you’re watching television the higher brain regions (like the midbrain and the neo-cortex) are shut down, and most activity shifts to the lower brain regions (like the limbic system). The neurological processes that take place in these regions cannot accurately be called “cognitive.” The lower or reptile brain simply stands poised to react to the environment using deeply embedded “fight or flight” response programs. Moreover, these lower brain regions cannot distinguish reality from fabricated images (a job performed by the neo-cortex), so they react to television content as though it were real, releasing appropriate hormones and so on. Studies have proven that, in the long run, too much activity in the lower brain leads to atrophy in the higher brain regions. More importantly, studies have also shown that television and other radiant light sources SUPPRESS ALPHA BRAINWAVES. Yes—one of the most active and important brainwaves for kids is SUPPRESSED due to radiant light.

Herbert Krugman’s research proved that watching television numbs the left brain and leaves the right brain to perform all cognitive duties. This has some harrowing implications for the effects of television on brain development and health. For one, the left hemisphere is the critical region for organizing, analyzing, and judging incoming data. The right brain treats incoming data uncritically, and it does not decode or divide information into its component parts.

For a brain to comprehend and communicate complex meaning, there must be what we will summarize as “chaotic brain activity.” This means that there must be a dynamic flow of communication between all of the regions of the brain, using various brainwave frequencies, which facilitates the comprehension of higher levels of order (breaking conceptual thresholds), and leads to the formation of complex ideas. High levels of chaotic brain activity are present during challenging tasks like reading, writing, and working mathematical equations in your head. They are not present while watching TV. (Levels of brain activity are measured by an electroencenograph (EEG) machine, which is exactly what we use in our office. ) While watching television, the brain appears to slow to a halt, registering low alpha wave readings on the EEG. This is caused by the radiant light produced by cathode ray technology within the television set. Even if you’re reading text on a television screen the brain registers low levels of activity. Once again, regardless of the content being presented, television essentially turns off your nervous system.

This is exactly why we now know that using television, cell phones, computers, or other similar devices are furthering sensory processing disorders in kids. Sometimes the strongest thing I can add to their care is to tell the parents to take the ipad or computer away! Let their minds experience the ever so important alpha brainwaves! But I also have to even remind older patients to turn off the news and television. Studies have shown that people of all generations greatly overestimate the threat of violence in real life. This is no shock because their brains cannot discern reality from fiction while watching TV. (Remember…over 90{ed447ba55bbc0c9e7436468afbd9a24947a2cfe312c6141ce468f9c2ae1cfc08} of our brain activity is subconcious! Just because you keep telling yourself that you’re safe inside with no threats…doesn’t always mean that your brain is perceiving your environment the same way.)

Now, the disorder and dysregulation caused by prolonged exposure to radiant light can cause various dysfunction. The most common issue is disrupted sleep or emotional withdrawal. So if you do choose to indulge, make sure to do so responsibly. And please-start restricting cell phone usage in the “under 18” crowd. Their brain health depends on it!

If nothing else, also remember that Neurologically Based Chiropractic Care is a great resource to help improve not only alpha brainwave function, but other brainwaves as well.

Just another reason to keep getting adjusted and keep it a Myelinated Monday!